Developers have submitted a planning application to deliver a £140 million business park – with more than 1.75 million sq ft of accommodation – in the North East, which could create thousands of new jobs.

The proposals include a range of business, industrial / distribution units varying in size from 30,000 sq ft to 500,000 sq ft, a trade park consisting of 11 units from 5,000 sq ft to 10,000 sq ft, and ancillary amenity uses including roadside food offerings, a public house and a restaurant.  There is also the potential to accommodate a rail freight interchange. 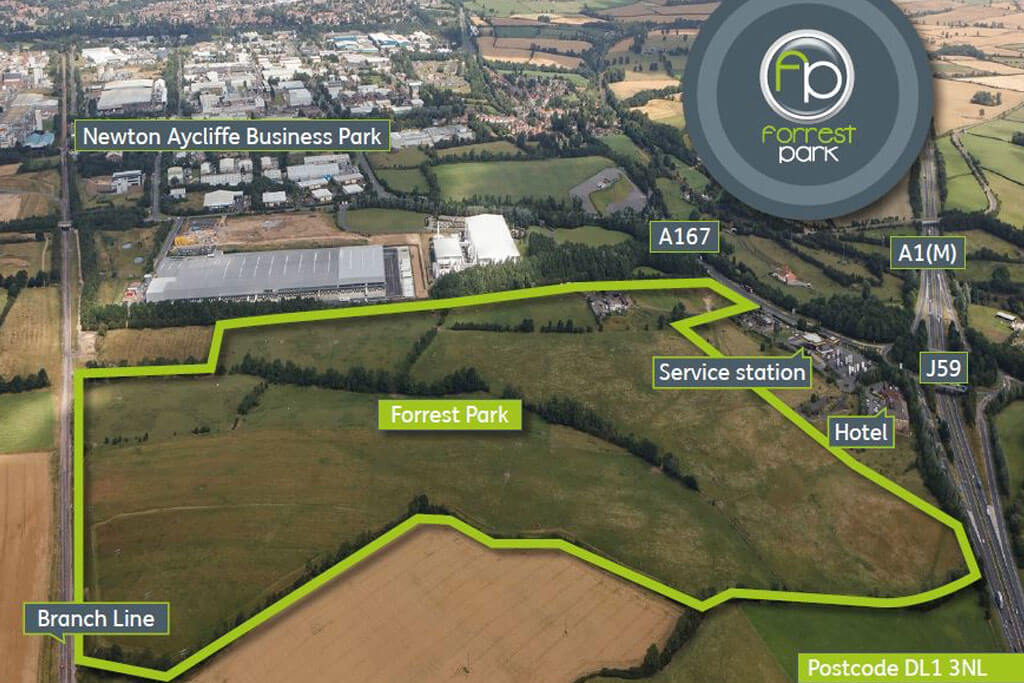 Forrest Park – which has attracted £13 million funding from the Local Enterprise Partnership – could create 3,200 jobs and deliver a gross value added economic boost to the area of £495 million over the next 10 to 15 years. A planning decision is expected in April.

Jonathan Robinson, Barberry Developments director, said: “It has been a pleasure working alongside Forrest Park Newton Aycliffe and we are excited at the prospect of delivering one of the North East’s premier business parks and it’s great that we have reached the stage where the proposals are now with the planners for them to consider.

“Working alongside Durham County Council, the Forrest family and the Local Enterprise Partnership, our vision is to create a business park that provides a wide range of high quality accommodation to attract major investment and jobs to the region.”

Aycliffe Business Park is already home to around 500 companies and around 10,000 employees. The preparatory ground works, site infrastructure including new substation, service connections and highways improvements known as the Forrest Park enabling works began in 2016 and have now been completed.

Jonathan Robinson added: “The LEP funding clearly illustrates a valuable commitment to fast-tracking the new infrastructure improvements, including a new 24MW primary substation, connecting services, and a new highways access that will enable us to bring forward the development pipeline and investment necessary to attract occupiers and new jobs to the North East.”

Cllr Carl Marshall, Durham County Council’s Cabinet member for economic regeneration, said: “The submitting of this application is a major milestone towards delivering thousands of jobs to the Newton Aycliffe area.

“This is a joint venture between the council and the Forrest family, and is just one of a number of sites the council is bringing forward to help deliver long-term economic growth and prosperity for the people of County Durham.”

Ben Holmes, director on behalf of Richardson, said: “It’s great to see the Forrest Park proposals making real progress and we are delighted to be working alongside both new and existing joint venture partners to deliver this important development.

“This will be our fourth major project in the region in recent years, having already delivered two phases at Freemans Reach in Durham, and adding to our existing Milburngate project. Richardson and Barberry have a successful and longstanding relationship that spans over 35 years, having completed numerous developments together. We are very much looking forward to working together again to deliver 1.75 million sq ft of employment space.”